We departed our B&B in The Key with just enough time to drive the two hours to Milford Sound; the only fiord in New Zealand accessible by road.

A quick stop at a bakery, a fill-up of gas in Te Anau and then a New Zealand traffic jam. Sheep. Sheep by the hundreds. The law states you must yield to sheep and follow all instructions from the shepherd. Sheep were stretched out for about a quarter of a mile. Our forward progress was halted but once all had crossed over the road and into a field the shepherd gave the go ahead and we were again underway although with the chances of making our boat somewhat in doubt.

Overtaking a tour bus on the winding road, we were slowed for some distance before it pulled off into a rest stop. Almost before we were back up to speed we encountered another bus. We had been told how many, many tour buses made this trip and now we were witness to that fact … as our concerns about missing the boat grew.

The first parking lot at Milford was full. Sherrie jumped from the car and headed on foot to the terminal. The ticket counter gave her tickets but before boarding she needed two things … one was the voucher Terry had in his pocket and the other was Terry.
Sherrie asked if the boat was going to leave without them. “It doesn’t leav  until we tell them they can leave,” was the response.errie went back out the door and could see Terry coming across the tour bus parking lot. “He’ll be here any moment…” Sherrie assured the counter people. A man walked in the door.
“Is that him?” they asked.
“No,” she answered with concern and a touch of pleading in her voice. Terry was next through the door. “The voucher … they need the voucher.”

Terry handed it over and we hurried out the waterside door, down the dock and up the ramp. Crew members were untying ropes as we boarded the Milford Mariner and before we had climbed the stairs to the passenger deck we were pulling away from the dock. Wheeeww!

Built for the purpose of operating in fiords, the Milford Mariner was designed along the lines of a scow, with a flat bottom and blunt bow. She is equipped for overnight cruises and sleeps sixty.

As our ship swung about and headed out into the fiord we recognized the image which graces most pictures of Milford Sound – the majestic presence of Mitre Peak (1683 m) dominating the skyline.

Despite its name, Milford Sound is actually a fiord. A ‘sound’ is created through earthquakes and sea wave erosion; whereas a ‘fiord’ is a valley carved by glaciers and flooded by sea water. When Milford Sound was named, the word “fiord” was not part of the English language.

Milford Sound sits atop an earthquake fault line and there is a tremor here about once every six minutes. Fortunately they aren’t strong enough to be felt; however, seismic activity is causing the surrounding peaks to ‘grow’ a half inch each year. Countering that growth is rain and wind erosion which is wearing down the mountains at approximately the same speed.

We had booked a Milford Mariner ‘Nature Cruise’ thinking, rather than just cruising through the magnificent scenery, we would enjoy the informative added commentary. Shortly after we were underway we stopped to view a small gathering of seals and were amazed at how close the captain could bring his vessel to the rock wall of the shore. Next … a fascinating close-up of a seal who had corralled a school of fish against a shallow rock bank and was diving through the center of the school feeding on his catch. When the fish attempted to disperse the seal would quickly round them up again and continue lunch. We had heard of this kind of behavior but never thought we would see it in the wild. Thrilling. Our boat being so close did not seem to phase the resolve of the seal to continue feeding.

As with other parts of New Zealand where there is little or no topsoil, in Milford Sound beech trees grow on the sides of often steep mountains and anchor themselves by entwining their roots to hold each other in place. It only takes one mature, heavier tree which can’t hold on any longer to begin a tree avalanche. The mature tree’s movement dislodges the two below it and they in turn take out the ones below them, and so on; the cascading inverted “V” comes crashing down, sometimes at extremely high speed. These bare spots can be clearly seen on the mountains. Regrowth begins with the appearance of lichen which, given time (70 years), creates a ‘bed’ suitable to accept tree seeds. These trees are slow to grow, spreading their root system and linking with other small seedlings around them. From avalanche to full growth takes about 150 undisturbed years. 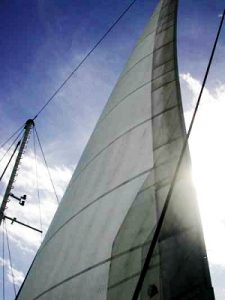 We left the fiord and entered the Tasman Sea; the sails were unfurled.  They do not assist or hinder the vessel’s operation but look beautiful and remind us of the days when sails powered the big ships which explored this coast. Because of the dog-leg turn at the sea entrance to the fiord, many sailing ships in the early days of discovery missed this deep water shelter. During one of his later voyages Captain Cook, although knowing of the Sound, refused to enter in fear of being prevented from departing by strong west winds and having to wait an indefinite time for a rare east wind to blow his sails in the right direction.

It was a beautiful sunny day for our cruise. A sunny day in the fiord often means wind which can blow through the narrowest part (only 400m wide) at speeds of 80 to 100 knots but not today – a gentle breeze at best.

It hadn’t rained for weeks so there were only the four permanent waterfalls to ‘oohh’ and ‘aahh’ over. The Sterling waterfall is three times higher than Niagara Falls (but not near the flow volume) while the Bowen Falls, a few minutes’ walk from Milford’s docks, also puts on a beautiful show.
We were told that on rainy days Milford Sound can often be at its most spectacular with a seemingly endless display of ‘temporary’ waterfalls; we thought it pretty spectacular today.

Whether you sail on the Sound or not, the drive to Milford offers plenty of stunning scenery; gorgeous views both on the way there and back. Mitre Peak, as seen from Milford, is impressive and you are within touching distance of Bowen Falls; considerable cascading water even during dry times.
At the foot of Bowen Falls is a Canadian connection … the grave of William Ward Rathbun; born in St John, New Brunswick in 1830 and died in 1894 at Milford Sound “whilst working on the Milford Track construction.”

We continued south … destination, Invercargill. A local suggested a route not marked on the map which eventually linked up with Highway 99.

Along the way we passed fields of sheep.

Lots and lots of sheep.

Since our arrival in New Zealand we have been amazed by the number of sheep. We knew there were plenty, approximately 40 million (versus 4 million people), but the numbers did not prepare one for the visual…. sheep, sheep and more sheep. And if there are no sheep in a field, the field is recovering from grazing and awaiting the return of sheep or its home to grazing deer, dairy, beef or elk or planted with a winter crop of swedes. Staggering!

Whalers and sealers came to southern Fiordland in the early 1800s. Native forest and flax attracted the first Europeans as did the gold discovered near Orepuki in 1865. Settlers cleared the native forest to provide land for farming which, together with forestry, remain the main industries today.

We stopped at Clifden; checked out the Waiau River, the largest river in the Southland Region, as well as nearby limestone caves which provided shelter for Maori jade and animal hunters as they moved through the area.

A brief stop at Te Waewae Bay allowed us to gaze across Foveaux Strait to Stewart Island; tomorrow destination.
This stretch of coastal water is a traditional, and much valued, source of kai moana (seafood) for Maori people. To safeguard the future of fish that breed and feed in the bay, the Maori and the fishing industry have declared Te Waewae Bay ‘off-limits’ to commercial fishing.

Monkey Island, accessible at low tide, just invited to be explored. Much speculation surrounds the naming of this island. Before the road from Riverton reached here, a slip-way was built on the island so boats (being the only means of delivering supplies) could be unloaded. A monkey-winch was used to haul the boats ashore and thus, it’s presumed the island’s name.

Arriving in Ivercargill we used the phone at the Information Centre to secure a B&B for the night. Right next door is the Southland Museum and Art Gallery and a statue of what we thought was an iguana, but found it to be representative of the tuatara; an ancient reptile which has survived only in New Zealand.  Even in New Zealand it is extinct on the North and South Islands but still surviving on thirty-five small islands and thriving at the Southland Museum ‘tuatarium’ in Ivercargill.

Bluff, the southernmost town on the South Island, is a major port and fishing center, famous for its oysters. Oyster season had just opened (late March) and it was a must we try some. Sherrie does not like oysters … correction … did not like oysters; the fresh cooked Bluff oysters she enjoyed for dinner were cause for reconsideration. Fish, most anytime, is delicious and New Zealand blue cod is melt-in-the-mouth deliciousness.  Just ask Terry.

INVERCARGILL INFORMATION CENTRE
The hospitable staff at New Zealand’s southernmost city’s information center is knowledgeable, able to advise as to what to do and see while in the Southland, plus provide information on special events, restaurants and assist in locating and booking suitable accommodations. Free maps. This is the place to begin your discovery of Invercargill and surrounding area.
Website: southlandnz.com/discover/invercargill
Address: inside the Southland Museum and Art Gallery, 108 Gala Street, Invercargill
Phone: +64 3 211 0895
Email: visit@southlandnz.com

SOUTHLAND MUSEUM AND ART GALLERY
The most popular attraction at Southland Museum’s visitors is their ‘tuatarium’ where you can see live tuatara, at all different ages (Henry is the oldest at 110), thriving in this ideal designed environment.
Website: www.southlandmuseum.co.nz
Address: 108 Gala St, Invercargill
Phone: +64 3 219 9069
Email: office@southlandmuseum.co.nz

STEWART ISLAND FERRY
During the one hour crossing between Bluff and Stewart Island the crew offers complementary tea and coffee and provides commentary on the area. Watch for wildlife including mollymawks (albatross which sometime soar behind the ferry). If the weather is good and you don’t mind an occasion spray of sea mist, outside is the place to be.
Website:   www.stewartislandexperience.co.nz
Address: Bluff Visitor Terminal, Foreshore Road, Bluff
Phone: +64 (0)3 212 7660
Free phone in NZ 0800 000 511 (within NZ)
Email: info@sie.co.nz

This entry was posted in NEW ZEALAND

About the Writers Sherrie & Terry Thorne

Sherrie and Terry created Travel Tales in 2008, though they began travelling the world many years prior. Having visited well over 100 countries the pair have a unique perspective on both the art of travel and the world at large.

They share their journeys through travel writing, travel videos, photography and more. They are keen adventures who are not afraid to step out of their comfort zone and view the world through ever-changing eyes.

About the Writers Angelina & Stephen Thorne

Angelina and Stephen are guest contributors to TravelTales and are also the creators and writers for their own lifestyle site, TenMoreSteps.com

Together, the two have shared in adventures around the globe and have often times accompanied Sherrie and Terry in their travels.