Nice Is Nice – Either Way Its Nice

Behind Nice’s impressive cultured front are earnest artists, street markets and an endless tide of tourists

We had planned to leave earlier in the morning for our daytrip to Nice but got underway a little late from Villefranche-sur-Mer, with just enough time to grab a baguette before running to catch the bus.

We began our tour of Nice at the Marc Chagall Biblical Message Museum. Chagall was a modern painter whose work is childlike in its simplicity but rather complicated in its interpretation. (Terry remembers his work as being happy and positive.) Chagall definitely had a passion for life and expressed that through his art; this particular collection was painted later in life. The main exhibition is based on the first two books of the Old Testament, Genesis and Exodus, while a collection of five paintings reflect his personal interpretation of the Song of Songs, another book from the Old Testament.

Using Rick Steve’s guide book for direction we started our self-guided walking tour on the Nice’s English Promenade. The English, who like to vacation away from drizzly London, built this wide promenade (which now stretches four miles along the coastline of the Bay of Angles) so they didn’t have to deal with the indelicacies of walking on the uneven, dirty and smelly sand.

Across the busy avenue which parallels the promenade is an impressive row of up-market hotels, restaurants, condominiums and even a couple of casinos … and of course McDonalds.

Encouraged by Rick’s book, we dropped into the Hotel Negresco which was classified a historical monument by the French Government in 1974. The hotel’s Royal Salon reflects the opulence and elegance of a bygone era. A bright dome encircles the ceiling. The metal framework for the dome was constructed in the workshops of Gustave Eiffel (of Eiffel Tower fame) and built in a manner so as to be concealed, thereby further enhancing the beauty of the stained glass windows. 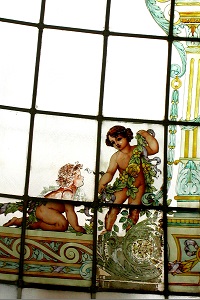 The chandelier in the center of the Royal Salon (which can be seen from the lobby) is 4.6 m in height and 2.6 m wide. This extravagant piece, dangling 16,800 pieces of Baccarat crystal, was ordered by the Tsar of Russia at the end of the nineteenth century. In fact, the world famous House of Baccarat made two identical copies for the Tsar. One chandelier was delivered and installed in the Kremlin, where it still hangs today. The second was never delivered because of the Revolution and it remained in France where today it is admired by guests and visitors to the Hotel Negresco.
The columns and moldings around the oval Royal Salon are accented with 24 karat gold and between columns are large portraits of France’s Royals.

Continuing our stroll down the promenade, the odd sprinkle of rain was felt before entering a park built atop the riverbed which once divided France from Italy.

We wove our way along narrow streets and peered in windows of art galleries, clothing boutiques and what seemed to us an overabundance of pastry shops and restaurants.

Just as we approached an open air market the rain began falling in earnest and we sought shelter under awnings that would usually protect market vendors and their customers from the sun; which reportedly shines here 300 days a year (and we had to pick one of the remaining 65/66!).

From the market awnings we scampered up yet another narrow laneway and took refuge in a gelato [Italian ice cream] shop. We took our time choosing from the 96 flavors on offer. What would you pick? Thyme, tomato, basil or, perhaps, rosemary, poppy or lavender? What about fig, mango, pear or almond? For those who can’t decide between an ice-cream or after-dinner liqueur here you can order both in the same scoop.

Our next rain-cover stop was a wine shop. More choices – bottled or bring your own container. Draw from the many ‘on tap’” … and oh so inexpensive. A bottle of French Merlot cost 3 Euro … same price as one of our two-scoops-in-a-waffle-cone gelatos.

The rain slackened a bit and we maneuvered our way back to the bus depot for the ten minute return ride to Villefranche-sur-Mer; our hotel was a short block from the bus stop. We stopped on the way at a small vegetable and fruit grocer plus the bakery to pick up some items for a picnic dinner.

First on our to-do list upon arrival in our lodging was to open the French doors to the balcony’s view and spread a few crumbs for the dove that visited us this morning.

HOTEL LE PROVENCAL, Villefranche-sur-Mer–
A lovely two-star boutique hotel ideally located 10 minutes’ walk from Villefranche-sur-Mer train station or beach and only a block from the bus to/from Nice. Rooms are clean and the staff is welcoming and helpful. Their breakfasts are serve in the garden. Book early to secure a room with a view over old town to the Mediterranean … one of several reasons to choose Hotel le Provencal in Villefranche.
Address: 4 Avenue du Marechal Joffre 06230, Villefranche-sur-mer
Phone: 04 93 76 53 53
Email: On website contact page
Website: hotelleprovencal.fr

This entry was posted in WESTERN EUROPE

About the Writers Sherrie & Terry Thorne

Sherrie and Terry created Travel Tales in 2008, though they began travelling the world many years prior. Having visited well over 100 countries the pair have a unique perspective on both the art of travel and the world at large.

They share their journeys through travel writing, travel videos, photography and more. They are keen adventures who are not afraid to step out of their comfort zone and view the world through ever-changing eyes.

About the Writers Angelina & Stephen Thorne

Angelina and Stephen are guest contributors to TravelTales and are also the creators and writers for their own lifestyle site, TenMoreSteps.com

Together, the two have shared in adventures around the globe and have often times accompanied Sherrie and Terry in their travels.